How to reduce the audio latency in iOS

What is audio latency?

When you use a software processor, like TH-U, to process an instrument with your phone or tablet in realtime, there is a delay between the tone entering into the device and the processed tone at the audio interface output. This delay is called Audio Latency, or Roundtrip latency, which typically is between 3 to 40 milliseconds.

Why there is audio latency?

In order to connect your instrument (or the microphone) to the iOS device, you need an audio interface with A/D and D/A converters.
The Roundtrip Latency is the sum of the latencies of these 5 stages.

Does the latency depend on the audio interface?

Does the latency depend on the software?

Yes, but that’s not the main part of the latency, unless you use very large buffer sizes.
For a typical configuration of 48KHz and a buffer size of 64 samples, the latency introduced by the software is
2 x 64 / 48000 = 2.67 milliseconds
while the overall latency ranges from 6 to 15 millieconds, depending on the audio interface.

Why some apps declare very small latency values, like 0.5 or 1 mSec?

How can I measure the latency?

By using specific apps, like the "Audio Latency Meter for iOS”.

How can I get rid of the latency?

You cannot get rig of the latency: you can reduce it.
You should choose a low latency audio interface, because the latency mainly depends on the interface.
Than, make sure to choose a small buffer size in your software. 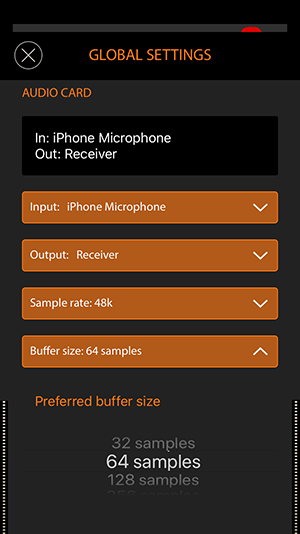 Our suggested settings for TH-U iOS is 48KHz, 64 sample buffer size.
We do not suggest to use 96KHz: the benefit on the latency is negligible and you’ll keep the CPU under pressure. Let’s compare how we can improve the latency by switching from 48KHz to 96KHz with a 64 samples buffer:
As you can see, the benefit is negligible, because the largest part of the latency depends on the audio interface.